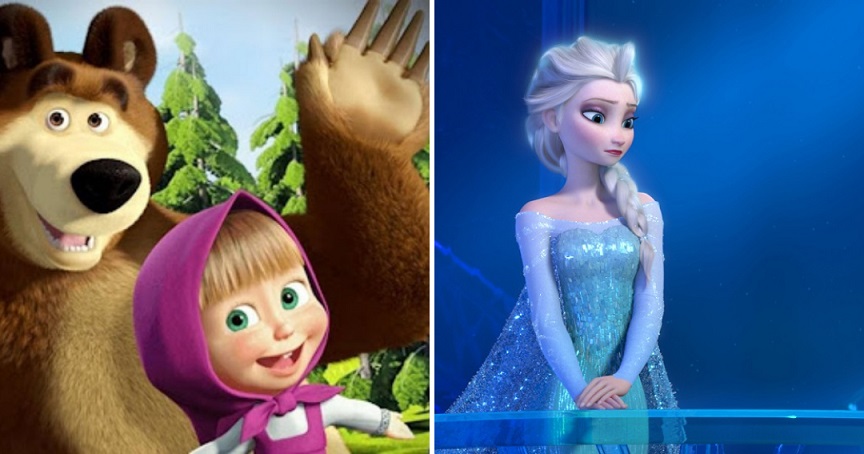 Here are 7 cartoons that you thought were made up recently, but which are in fact much older

Not only children but also we, as adults, love watching cartoons and animated films. This is indisputably evidenced by the immense global numbers of cinema tickets sold in recent years to audiences wishing to see these types of films.  In most cases, the audience only has a chance to see the “final product”, i.e. how the creators have managed to interpret a fairy tale for the big screen. And as audiences we almost never investigate the origin of the story, or the tale that it was inspired by. If we did, we would find some things that would really surprise us.

These 7 relatively newly screened tales were inspired by stories that have existed for decades.

#1 The princess and the frog

In this beautiful Disney story from 2009, the main character is the young Tiana, who dreams that one day she will manage to have her own restaurant – that's why she needs to make the money for her dream as fast as possible. Her friend provides her with a great opportunity – to prepare catering for a whole ball. However, she has no idea that there will also be a young, spoilt prince at the ball who wants to win her love with magic. Predictably, he loses control of his magic and accidentally turns himself into a frog. The only way for him to become human again is to get a kiss from a person who truly loves him. If this story rings a bell, it’s not a coincidence. This is an old tale from the Grimm brothers, Disney just changed it and adapted it for today’s world. If you want to read the tale in its original version, you can find it on Readmio.

If you have even been to Copenhagen, you know that one of the most visited monuments in the city is the statue of the Little Mermaid. Lots of tourists still come to see it. It is not here in honour of Walt Disney, but in honour of the original author of the tale, the Danish author Hans Christian Andersen. However, his version is much more dramatic and practically unsuitable for children – so Disney's story is quite heavily modified. If you want to read the tale The little mermaid, you can find it on Readmio.

This story already has a lot of adaptations, and the earliest Disney version dates back to 1950. Did you know, however, that the original tale is even older? It is also from the workshop of the already mentioned Grimm brothers and, similarly to the Little Mermaid, we can state without debate that the original is a version in which many children would cry upon hearing some of the more bloody scenes. However, even in this case, Disney managed to turn the theme into a cartoon that adults and children alike love.  You can also find the tale Cinderella on Readmio.

#4 Masha and the bear

What is interesting about this cartoon is that since it has become popular only recently and has been a huge success, most people thought it was a recent novelty. However, the truth is that it was created all the way back in 2009, when it was historically broadcast on the Russian channel for the first time. Its roots also go quite deep, as it is adapted from an old Russian folk tale. Today, its animated version has several dozen episodes and children love it. If you want to read the tale in its original version, you can find it on Readmio.

This Disney cartoon is from 2010, but Walt Disney's workshop has again taken the theme from the original tales of the Brothers Grimm. And since the original version is too cruel, this cartoon was again modified for the tastes of modern audiences. For example, in the original, Rapunzel wasn’t imprisoned in a tall tower but simply thrown into the wilderness. When the prince comes to the tower to look for her and does not find her, he jumps out of the tower and lands directly in a thorny bush, which blinds him immediately. Of course, we don’t find such gory details in Disney’s family-friendly version!

#6 Beauty and the Beast

Who doesn’t know this one? Its roots also go quite far- in this case they can be traced all the way back to a traditional French fairy tale called La Belle et la Bete. While the story is similar enough to be thought of as the original, only some elements were used as inspiration for the retelling. In the original version, for example, Belle had two envious and jealous sisters.

Just like The Little Mermaid, this favourite cartoon was also inspired by an old story written by Hans Christian Andersen. The original story was again significantly more cruel. In the original story, the evil witch creates a mirror that turns all the beauty of the world into something ugly and repulsive. An elf drops the mirror and it breaks into a million pieces, which subsequently dig into the hearts and eyes of people all over the world. 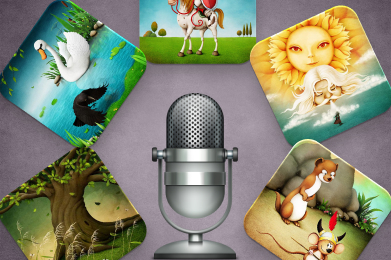 How to create your own audiobook fairytale

There are a number of sources where you can find ready-made audio stories. But how about making your own recording that combines your voice and sound effects? 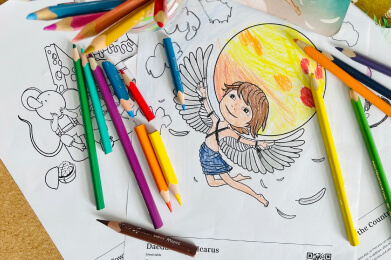 Have your children put their favourite heroes in colour. 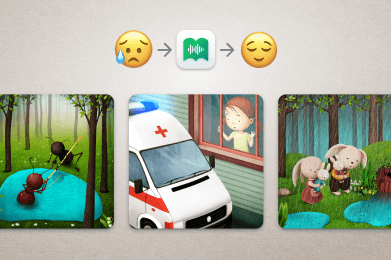 Difficult situations and how to talk with children about them

If we have children, we do not only face our own fears, but also the fears that the situation raises in them. So let's look at how to calm children in such moments and how to talk to them about difficult situations.