One of Andersen's most famous and beautiful fairy tales.A touching story about the love of a little mermaid who falls in love with a prince. Because of love, the mermaid becomes human and sacrifices not only her voice, but ultimately her own life. 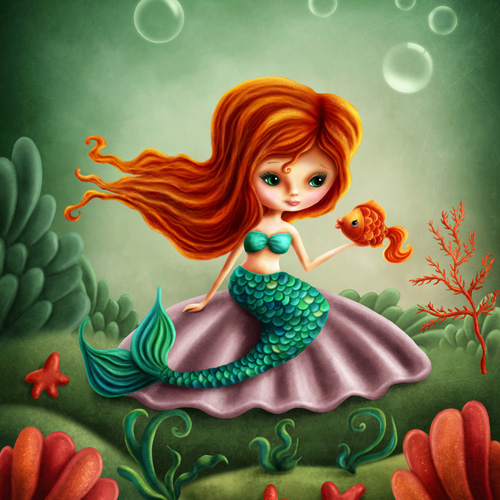 Deep in the ocean, where the water was blue and crystal clear, and no sun beam could pierce the surface to the bottom, there was a vast kingdom. It was beautiful, with coral walls and algae of all colours. All the ocean creatures lived peacefully together: small and big fish, plants, sea urchins, and mermaids. The mer-king had five daughters. His mother helped him rule the kingdom and raise the girls, because his wife had died many years before.

Everyone in the kingdom followed the rules, and that’s why they all lived well. One of the rules stated that no mermaid could go near the water’s surface until she turned fifteen years old. Until then she had to stay in the kingdom to be safe.

The king’s eldest daughter was about to turn fifteen. The youngest, who longed the most to see the world above, had to wait five years more. She would sit for hours in her garden (the girls each had their own gardens) and imagine all that fun she’d have on the surface. In the center of her garden, there stood a marble statue of a human prince. She had found the statue on the ocean floor, and liked it so much that she even talked to it.

Their granny would tell them stories about all the beautiful things above the ocean. She always made sure to add that the most wonderful things that could be found were in fact not above, but right here in their watery home. But the little mermaid still couldn’t wait to see the world above.

Time passed and the youngest was about to turn fifteen, too. For years she had listened to her sisters’ stories about what it was like up above. Her eldest sister was five years…