This old folk tale proves that people’s imagination has no limits.The story is about a king who can’t decide which of his two sons ought to inherit the kingdom. He gives them three tasks. The one who deals best with them, will get the throne. 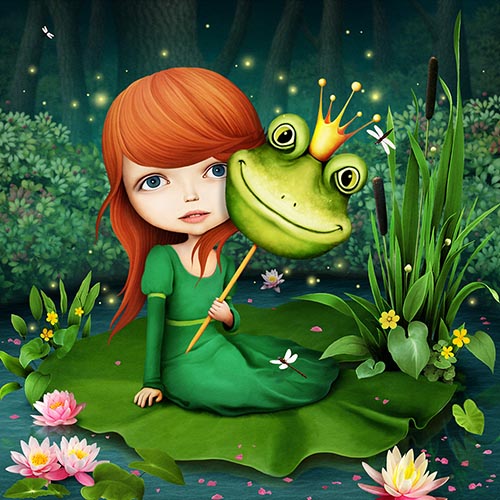 Once upon a time there was a kingdom ruled by a very old king. He had two sons, Ivan and Victor, but he hadn’t yet decided to whom he would pass the crown when he died.

One day, he sent for them and said, “My dear sons, my days are coming to an end. You will get three tasks. The one who handles them best, will become the new king. Here is your first task: call upon your future brides and bring me the most beautiful scarf they have.”

To Victor the task seemed easy. He couldn’t wait to complete it. The beautiful girl he was going to marry had a wardrobe full of the finest clothes. He ran to her house as fast as he could. However, Ivan became incredibly sad. He had no idea where to get a scarf, because he still hadn’t found his love. He wandered the garden, pondering what to do, but he didn’t come up with anything. Having sat under a tree deep in thought, he suddenly heard a frog croak. It was right on the stone next to him. “Why are you so sad?” asked the frog.

“My father is the king. He is going to pass the kingdom to the one who handles his three tasks the best,” Ivan explained. “Unlike my brother, I can’t even complete the first one. I’m supposed to ask my girl for the most beautiful scarf she has and bring it to him… but, you see, I don’t have a girl yet,” sighed the prince.

“Stop worrying, prince! I can help, come with me,” said the frog, and hopped away.

Ivan followed the frog into a cave.

“Once, long ago, there was a pool here, but it dried up many years ago. I need you to bring me water,” the frog said. Ivan had no idea what for, but he went out to the stream and brought back as much water as he could. When he was done, the frog said, “Look in the back of the cave, and you will find what you need.”

Ivan ran to the back of the cave and found the most beautiful scarf he had ever seen. Thrilled, he thanked the frog, took the scarf and rushed home.

The old king saw how eager his sons were to show him what they had, so he called them up to the throne. Victor held out a splendid blue scarf.

“Well done, Victor! That truly is a beautiful scarf. I don’t think I’ve ever seen a prettier scarf in my life!” said the king.

Viktor knew his brother didn’t have a bride so he already felt like a winner. But then Ivan held out the scarf he had got from the frog. At once the whole chamber lit up with its beauty and even Victor had nothing to say but to admit that the scarf was more beautiful than his.

“Your second task will be” the king said, “to go to your brides and bring me the most beautiful ring they have.”

Victor immediately ran to his girl and asked her for the most beautiful ring she had. Ivan again wandered around the garden sadly because he still had no bride. Having reached the familiar tree, he again saw the frog.

“Why are you so sad, young man?” asked the frog.

“The scarf was beautiful, but I can’t do the second task,” Ivan said. “I have to bring my father the most beautiful ring my bride has. But I haven’t found a bride yet.”

“Don’t worry,” the frog said, yet again. “Follow me.” The frog took him back to the cave and asked him to go to the forest and gather some wood for a fire. Ivan didn’t hesitate to go out to the woods and start chopping. He gathered as much wood as the frog wanted and when he had collected enough, he was presented with the most beautiful ring he had ever seen. Ivan thanked the frog from the bottom of his heart and ran home.

Once again, the two brothers met in the royal chamber to show their father what they had brought. Victor gave his father a lovely golden ring inlaid with rubies.

Then Ivan took his ring out of his pocket and held it out to his father. The lustre and splendour of the jewel overwhelmed them.

Then he gave his sons the last task: “Go to your brides and bring them back with you. Whoever has the more beautiful bride will get the crown.”

Victor ran to fetch his girl. “This time,” he thought, “I will triumph! Ivan might have a better scarf and ring than me, but he doesn’t have a prettier girl!”

All of a sudden, the frog hopped over to him and asked, “Why are you still so sad, lad?”

Ivan sighed and said: “The third task is the hardest. Father wants me to introduce my girl to him. The crown will go to whoever has the prettier bride. But I don’t have a bride, I only have you.”

Ivan stared at the frog, confused. What help would it be to kiss a frog? But since he had already completed her other tasks and gotten exactly what he needed, he decided it couldn’t hurt to try. He picked the frog up and held her close to his lips, closed his eyes and kissed her. Suddenly, the ground trembled and the sky lit up with lightning. Startled, Ivan opened his eyes and saw the most beautiful girl he had ever seen standing right before him. He looked around for the frog, but only saw the girl.

“It’s me,” the girl said. “I’m a princess, and I was cursed and turned into a frog many years ago. The only way to reverse the curse was a kiss from a good man. If you’ll have me, I will be your bride.”

Ivan was so happy! He took her hand and brought her home to his father. Victor’s girl was very pretty and elegant, but she couldn’t compare to Ivan’s princess.

“You have both found such beautiful brides,” the king said, “But it is Ivan –“

“Father,” Ivan interrupted, “I would like to concede to my brother. Victor should have the crown. I will marry my princess and we shall rule her kingdom, away in the East.”

Victor and his bride were ecstatic, and the king was happy that he did not have to choose between his sons. And so the brothers lived happily ever after, loving their wives dearly and fairly ruling their kingdoms.