In one of the most famous classic fairy tales of all time, we learn about modest Cinderella, who has to stand the heartless behaviour of her stepmother and half-sisters. However, thanks to the help of a magic fairy, she will finally have a happy ending. 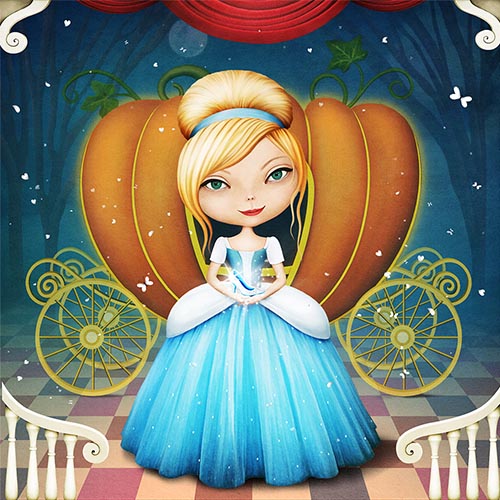 A long, long time ago, in a beautiful kingdom with a big, majestic castle, there lived an old widower who had a very beautiful daughter named Ella. He loved her above all else, trying to raise as well as he could being a single dad. She had a very kind heart, just like her mother had, and she was very hardworking and always loved to help.

After many long years of loneliness, Ella’s father met another woman. He decided he was going to marry her. She seemed to be a kind, loving person at first. He thought she would make a wonderful mother for Ella, but the truth was that his wife-to-be was spiteful, selfish, self-centred, and as vain as a peacock.

She revealed her truly arrogant and hateful nature right after the wedding, when it was too late for him to change his mind. Unfortunately, the woman’s two daughters, Nina and Lena, weren’t any better.

They were lazy and mean, and as vain as their mother. Most of their time was spent in front of a mirror, where they would stare at themselves for hours. They particularly loved brushing their brittle hair, putting on green eyeshadow and soaking their big feet in a large tub of water.

Since the very first day she moved in, Ella’s new stepmother started treating her terribly. She was cruel and unkind, because she couldn’t accept that her husband’s daughter was far sweeter, more beautiful and more skilled at almost anything than her own two daughters.

Ella’s father travelled a lot for work and wasn’t often home, and whenever he was away the three arrogant women would force the poor girl to be their personal handmaiden. She had to serve them, comb their brittle hair and attend to their every whim, as if…