The Wolf and the Ram

Being smart can help us defeat even the strongest foes.A lamb wanders into the woods. A hungry wolf wants to take advantage of him at once and have him for dinner. But the lamb’s wittiness easily tricked the wolf. He saves his own life not once, but twice - thanks to his agility and intelligence. 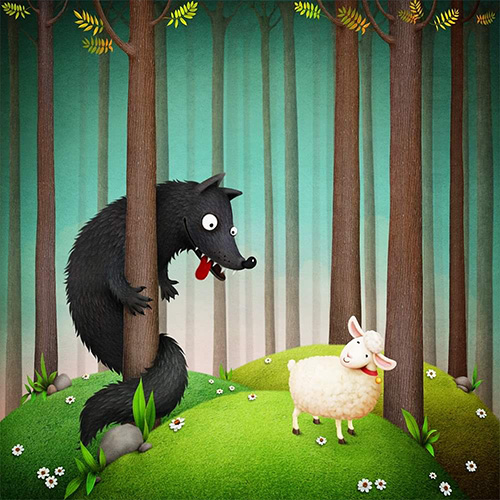 Once upon a time, there was a little fuzzy lamb who liked to wander around and explore the world. One day, he wandered all of the way into a deep forest filled with tasty grass. He felt very happy there, and so he didn’t even notice that he’d strayed from the path.

When he realized that he was lost and couldn’t find his way back to the meadow, he got scared and began running wildly back and forth. His frightened bleating was so loud that a hungry wolf heard it. “Iayaiyai!” he cried in fear. “Grumble, grumble,” said the wolf’s tummy.

He went to the little lamb and when he saw him, he decided instantly to eat him for dinner. He licked his big wolf lips. But the lamb started pleading with the wolf: “Wolfie, please, don’t eat me now that I’m so small. What kind of dinner would I even be? Just a few bites. You won’t even know that there’s anything in your belly at all. Wait until I grow up, I will make a much better dinner for you then.”

“Well, I suppose you’re right,” said the wolf. “I will wait until you grow up and become plump and big and juicy, and I will eat you then,” said the wolf and he let the lamb go with his stomach grumbling.

Time went by, and the little lamb grew into a big, strong ram that wasn’t scared of anything. One day, he again met the wolf who’d spared his life.

“Well, ram, have you forgotten about your promise?” asked the wolf with a grrr.

“I haven’t forgotten at all,” said the ram, “but now I’m too muscly and firm. It would only hurt your teeth and it wouldn’t be a good meal for you at all.”

The wolf became very angry. He howled furiously because he understood that the ram was fooling him again. And he was hungry. He insisted that promises have to be kept, and he was determined to eat the ram - no matter what.

But the ram had an idea: “Alright then. But I do have one last wish. Beyond the forest, there is a big round hill. I will climb up, and you just wait on the bottom with your mouth wide open. I will roll down and fall straight into your belly! You won’t have to chew my meat, you won’t break your teeth and it will make it easier on me, too.”

The wolf smiled and was quite happy with this idea. He wasn’t a young cub anymore, his teeth were no longer the best, and he really didn’t want to break them. Plus, he was pretty hungry.

And so they went to the hill. The wolf waited with his mouth wide open under the hill and the ram went to the top. On the hill, he looked around breathed in, breathed out, and he ran as fast as he could and came flying at the wolf at full speed.

His horns bashed straight into the wolf who immediately fell unconscious from the blow. The lamb-ram happily got up and hurried quickly away before the wolf could see where he went.

When the wolf woke up, he thought that he had eaten the lamb and had passed out from all of that delicious and fresh food. He shrugged and told himself that for such a big meal, he had recovered remarkably fast. And he went on his way, very satisfied.