This is a well-known fairy tale about three playful piglets who decide that each of them should build their own house by the river. The two smallest piglets didn’t feel like working at all and wanted to have this task done as soon as possible. However, the hungry wolf abused their laziness. 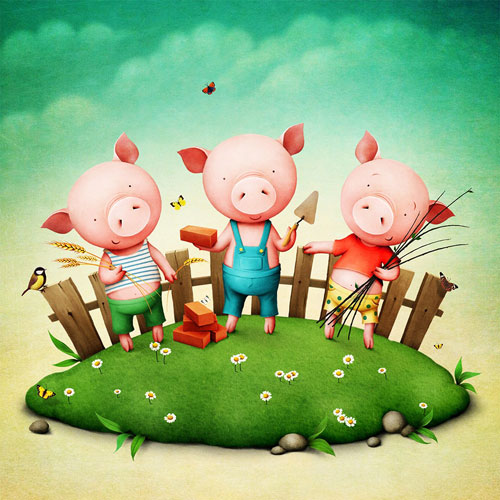 Once upon a time, there were three piglets named Dip, Tip, and Pip. Dip was the eldest and the most experienced out of all of them. His parents had raised him to look after his younger brothers, who would play in the meadow carelessly all day long. Dip liked to play as well, of course, but sometimes he had to also do some grown-up tasks.

From an early age, Dip had had a black spot around his left eye. Tip and Pip would always tease him about it. They would ask him if he had forgotten to wash in the morning, because his eye looked dirty. Dip always got upset about it, because he actually made sure to wash properly so he could be a good example for his younger brothers.

Dip was also very wise and liked to give his brothers lessons. Tip and Pip hated lessons from their brother, so whenever they didn’t feel like listening to him preach, they would start giggling and point at Dip’s spot. This usually led to a wild chase, and this was exactly what Tip and Pip wanted. Since Dip was heavier, they could run faster than him, and when he chased them they could hear him stomping loudly behind them.

Tip, the middle brother, was a little naughty. He liked to come up with games and ideas for adventures that he could drag Pip into. He hated chores and didn’t really enjoy learning, so he often wondered whether he really needed to become a grown-up. He had a hard time listening to his older brother or parents. They often didn’t know what to do with him. Tip knew that he was supposed to listen to grown-ups and do exactly as he was told, but sometimes a new adventure was just too good to miss out on!

Pip, the youngest, was no better than Tip. Sunbathing lazily in the grass was the thing he enjoyed the most, as well as whistling his favourite song and watching the clouds swimming in the sky. He loved playing hide-and-seek, but his parents had banned it long ago because Pip always accidentally wandered toward the forest where a big hungry wolf lived. They had had to save Pip from the big bad wolf so many times that one day his parents had simply declared that hide-and-seek was no longer allowed.

The wolf was very cunning. He spent his days scheming up new ways to catch the little piglets. His mouth watered whenever he imagined the delicious dinners he would make out of them. The wolf had already learnt a few hard lessons from the shepherd who lived down the road. He had given the wolf a good beating when tried to catch a sheep from the fold by his hut. All the sheep stayed together, as close to the shepherd’s hut as they could, and when there was danger they would start bleating as loudly as possible to wake the shepherd up.

As time passed, Dip, Tip and Pip grew up fast. Their family home started feeling rather tight for all three of them, so one day their parents told them it was time they all moved into their own houses like grown-ups.

“You are all old enough,” their father said. “It’s time for you to build your own houses.”

The eldest, Dip, nodded in agreement and wasted no time in getting started. He thought everything through. He made plans and prepared, exactly as his parents had taught him. “You need to do any work that you have properly,” they had always told him. He decided it would be most responsible to build his house with bricks, even though it was the most difficult way and took the longest. He decided to build his house in the meadow, and when he started construction the whole forest could hear the banging and knocking that came from his building site.

However, Tip and Pip didn’t feel like putting so much work into building their own houses, because that would certainly mean no time for fun!

Tip, the middle brother, decided to make his house out of wood. There was enough wood in the forest, he thought, and he wouldn’t need to work too hard on it.

The youngest brother, Pip, was even lazier and decided to build a little house out of straw. Planning things or thinking too hard wasn’t really for him, so Pip just took some dry twigs he found by the forest and propped them up. Then he grabbed some straw from the ground and threw it over the sticks. He was quite proud of his house, as the work was easy and the house was finished in no time.

When Tip saw that Pip was done with his home, he shouted, “Wait just a moment, Pip! I only need to put a door on my house and then I can come over and we’ll finally be able to play!” Tip hammered in a few nails to hold the door, which held - even though it was crooked and made horrible squealing sounds every time he opened and closed it.

While Tip and Pip were playing in the meadow, Dip was about to finish building his brick house. His brothers constantly teased him and tried to persuade him to come play with them.

“Why do you even need a brick house?” asked Tip.

“Why don’t you just come play? You don’t need to work so hard!” shouted Pip from across the meadow.

But Dip would not be distracted! He knew that he wanted a nice brick house and he was willing to put in the hard work to get it.

After a while, Dip’s house was finally finished and he went to play with his brothers in the meadow. They had no idea that the big bad wolf was watching them. The wolf didn’t dare to approach the sheep at the shepherd’s hut, because he was still sore from the last time the shepherd had beaten him up, but he was hungry and fed up with eating blueberries. His mouth watered as he watched the plump little piglets run around. Suddenly, he sprinted out of the forest, straight at them! The piglets immediately ran to hide in their houses. Pip dove into his straw hut, scared, and a moment later, the wolf came sniffing. Pip could hear him breathing, and then he heard him take one deep breath and blow very hard at the straw house. The straw went flying in all directions, leaving only the stick frame of the house behind.

“Gotcha! Haha! You can’t escape me!” shouted the wolf, gleefully.

Pip didn’t wait for the wolf to grab him, though. Instead, he took off and ran as fast as he could to Tip’s house.

“Come on, hurry up!” Tip shouted from the doorway.

Pip just barely made it safely, and they slammed the door of the wooden house just in time. The wolf circled the house for a while, trying to find a way in. His stomach rumbled as loudly as a thunderstorm as he pictured the piglets on his dinner plate.

He took a deep, deep breath and blew very hard at the wooden house. But the house didn’t budge.

The piglets sighed with relief and shouted at the wolf, “Go away! You can’t get us! This house is strong and it won’t fall, no matter how hard you blow!”

It wasn’t long before the wolf noticed that the door was crooked. It was barely hanging onto its hinges! Pip had done a very lazy job of hanging the door and the nails it sat on weren’t even properly hammered in! The wolf ran at the door and bang! The door smashed into bits.

“Gotcha! You won’t escape me this time!” cried the wolf.

Pip and Tip took off and ran as fast as they could to Dip’s house.

“Help us! Save us!” they shouted. Dip was already watching worriedly out of the window of his brick house.

Tip and Pip made it just in time and immediately slammed the door. Pip locked it and peeked out the window. Again the wolf was making circles around the house. He wanted in badly because he was starving and so hungry he could hardly see. The wolf took the deepest breath he could and blew at the brick house. But the house didn’t budge.

The piglets sighed with happy relief and shouted at the wolf: “Go away! You have no chance of getting in this time. This house is strong and it’s not going to fall. You can blow as hard as you like!”

The wolf thought hard about what to do. The door was nailed down firmly, and he couldn’t see a way to move it, but he ran at it anyway and hit it with all his force. Bang!

He sat on the ground sadly, his shoulder aching from where he had hit the door, and tried to think of another way to get in. Suddenly, he saw the chimney and realized that was his chance. “They have no way of closing the chimney!” he thought. “I’ll climb up to the roof and slide down the chimney right into the house.”

When the piglets saw what the wolf was doing, they all got scared. They hadn’t thought about this option.

“What are we going to do?” asked Pip. “The wolf’s going to slide down the chimney and eat us all!”

Dip was scared but he pulled himself together quickly. He put some wood in the fireplace and quickly made a fire. By this point the wolf was already halfway down the chimney, and when the thick smoke started coming up, he got stuck.

The pressure in the chimney started building and building, and, suddenly, there was a giant bang like a cannon had been fired. The wolf flew out of the chimney like a cannonball, and landed miles away, all tangled up in the sharp brambles at the edge of the forest. The piglets relaxed, finally, and started to laugh and celebrate their escape.

“Now you need to build proper brick houses, too!” Dip said in his sternest voice.

Tip and Pip agreed without a second thought. There would be time to play later! They’d learned first-hand how dangerous fast and sloppy work can be, so they asked Dip to teach them how to make their own houses. For the rest of their lives, they lived safely and happily in their meadow, and the big bad wolf never bothered them again.