The Grasshopper and the Ants

This version of Aesop's fable teaches us that we always have to think about the future.When the young grasshopper saw the ants stocking up for the winter in the middle of the summer, it made her laugh. How could anyone work when there was such good weather outside? But the days passed, and soon the heat and sunlight were replaced by cold and snow. And while the ants had things ready, the grasshopper had to wait for anyone who’d feel sorry for it. 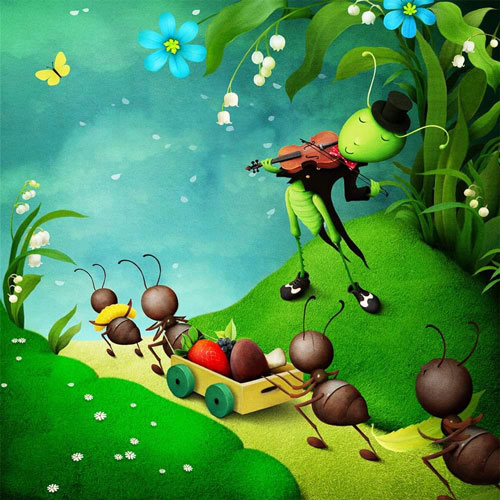 Once upon a time, there was a large, busy anthill in a meadow by a forest of oak trees. The ants were marching back and forth, carrying many different things. Nearby, a young grasshopper was grazing on the grass. He watched them for a while and finally asked: “What are you carrying, ants?”

“We’re preparing our food supply for the winter. When the snow and the icy frost arrive, it’s going to cover the whole landscape. It’ll be frozen and we won’t be able to find any food at all,” explained one of the ants.

The grasshopper started laughing. “How silly they are, working on such a beautiful summer day,” he thought to himself. “Hey, ants!” he called to them. “It’s such a nice day! You need to enjoy the summer and play,” he said. “Don’t you know that only fools work when the weather is so great?”

But the ants didn’t listen to the grasshopper and they kept gathering whatever they might need during the winter. They carried big leaves and small twigs to make their anthill firmer for the cold winter ahead.

They also carried mushrooms, blueberries, and other fruit from deep in the forest so that they would have something to eat year round. The silly grasshopper was still hopping around the meadow, wasting his days away. Every single time he passed the ants, he kept trying to convince them to think about fun and enjoy the sun.

“Come play with me,” he called. But the hardworking ants just shook their wee heads as they continued to prepare for the winter.

One day, an oak leaf landed on his nose. It was yellow and when he looked around, he saw that all of the leaves were changing colour. They were turning from bright green to yellow or red or brown. Autumn was here!

The days were growing shorter and they weren’t as warm and sunny as before. But there was still enough green grass in the meadow and still a few leaves on the trees. The lazy grasshopper didn’t think it could ever disappear and he wasn’t worried about food at all.

The ants kept marching back and forth without rest. One line led into the forest and the other led out. Each hardworking ant was carrying something that could be useful in the long winter.

The leaves were falling faster and faster and soon, the winter came. Snow and ice covered the meadow completely and the grass was trapped under it. Whatever the grasshopper did, he couldn’t get a single blade of grass. He just kept hitting a layer of ice over and over, but it wasn’t possible to break.

In the end, when he got very, very hungry, he went to the anthill to ask the ants for a bit of food. And he also thought he might like a bit of warm shelter, since it was so cold.

“Dear ants, my friends! Would you give me some of your stock of food I watched you prepare all summer? I’m really hungry,” he begged them, rubbing his belly. But the ants wouldn’t hear of it. They didn’t want to feed the lazy grasshopper all winter as well as themselves.

“You were laughing at us all summer and now you ask for our help? Our provisions are just enough to last us until the spring. You need to find help somewhere else,” they said, climbing back in their warm anthill.