The Dog and the Lion

Overestimating our abilities can do us much harm.A brave dog sets out to explore the unknown jungle. Because every animal thinks that the dog is the strongest and the smartest one, it inspires him to set out into the dangerous jungle. 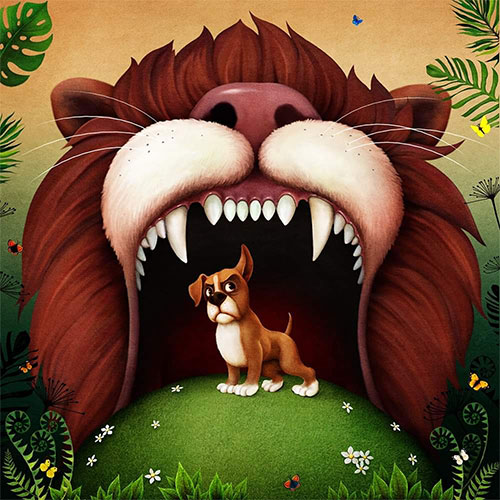 Once upon a time there was a dog named Hercules. He lived in a house that was only a stone’s throw away from the jungle. One day he realised that he had never been to the jungle, despite living so close. Of course, he’d heard a thing or two about it – curious, intriguing things - but he’d never dared to go there himself. So one fateful day, he decided it was high time he went to see for himself what a jungle really was and what was hiding inside.

Hercules had no clue what kinds of animals lived in the jungle, and why be careful if you don’t know what to be afraid of? They considered him an excellent hunter at the place he had been living in before. He was fast and strong and he could deal with all sorts of things. No way was there a threat for him in the jungle. In fact, he thought, they would at the very least respect, and maybe even fear him there.

It was early in the morning when Hercules set off to explore the jungle. He ran towards it fearlessly, and soon he was at its gates. Once he was inside, he boldly strutted around, looking curiously at everything around him and admiring the beauty of this new wilderness. Everything was lush and green, and the grass was so tall it could hide the biggest of bears. Every now and then, he would hear a rustle, and suddenly he would remember he wasn’t alone, but still he wasn’t scared.

Before long, a lion with a great bushy mane appeared just a few steps away from him. The big cat slowly paced in the tall grass, not even looking around. Hercules had never seen such an animal, nor…