The Tortoise and the Hare

Going slower you can often get farther.The hare often mocked the tortoise for being so slow. One day, she suggested holding a race. Simply the comical idea of It made the hare roll on the ground laughing. How did the race end? 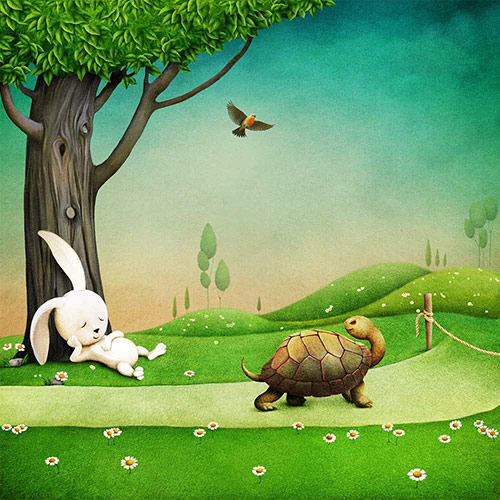 Once upon a time, there was a tortoise who lived next door to a hare. A day wouldn’t pass without the hare bragging how fast he could run. He would also mock the tortoise for being so slow.

“You must be the slowest animal in the world!” he would say. “I bet you can’t even rush”.

But the tortoise didn’t care. She was happy walking on at her own pace.

One day, the two bumped into each other yet again, and the hare immediately started poking fun at the tortoise. Finally, she ran out of patience, pulled her long neck from her shell and said: “Fine, let’s have a race. Then we’ll see if you can really beat me.”

The hare was so amused by this proposal that he fell down laughing. He laughed so hard he cried, rolling around on the ground, and when he finally calmed down, he said,

“What a good joke. You? Racing? You would really dare to race with such a great runner?” The tortoise only nodded, so the hare said, “Okay, as you wish! Let’s have a race.”

The rumors of the race quickly spread all over the forest. When the day came, all the animals had gathered to watch the event. No one wanted to miss it!

They helped the runners set up the start and finish lines, then chose a referee. Once everything was in place, they fired the starting pistol, and the race began!

The hare flashed off like lightning, and left the tortoise coughing in his dust. It didn’t take him long to make it across the racing track. As he got closer to the finish line, he started to think about how to show up the tortoise even more. The hare decided to wait for her…