This short tale illustrates the magic of the water cycle. Water can have different forms, and changes form depending on the weather.Forest animals learn how important water is when the sun drinks it all from the pond. They also get to know that it has a magical power – water can take many forms. 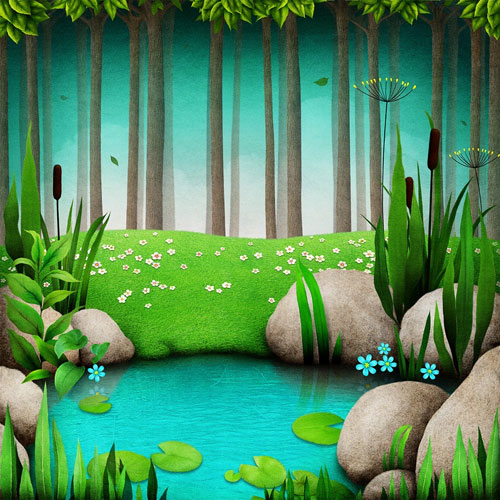 Once upon a time in a narrow valley there was a small pond. All the valley animals would go there for a drink or for a swim. The pond was peaceful and quiet until one day, as the animals splashed around, a hare noticed that there was less water in the pond than before.

“Can I believe my own eyes?” He asked his fellow animals. “Or am I dreaming? The pond certainly looks smaller now” To make sure he wasn’t dreaming, he took a dive into the water, so that it would wake him up.

“You know, I believe you’re right,” said the wise old turtle, who was sitting on the shore of the pond. “But no wonder, it hasn’t rained for several weeks now. The dry season is upon us, I fear. The longer it goes on, the less water there is in the pond.”

“No way!” the hare exclaimed, swimming toward the turtle. “Where will we play if the pond goes dry? And what will we drink?”

“I’m afraid the weather won’t listen to anyone, my friend. It’s the dry season coming. Soon, our pond will dry up in the hot sun.” The news bothered the other animals so they also came closer to listen to the wise turtle. “You see,” he continued, “When it is hot, tiny, almost invisible droplets of water rise from the pond to the sky. There will turn into little clouds of vapour and disappear. And I’m sorry to say that there’s nothing we can do to stop it.”

Soon sadness fell over the valley. The rain still hadn’t come and before long the pond completely dried up. Thirst and drought came upon the animals. The scorching sun dried out the whole valley. Every day the animals gathered at the pond. They still hoped to refresh themselves and waited for the water, but all in vain. The water was gone.

One day, the hare was so desperate that he looked up at the sky and shouted at the sun:

“You drank all our water, you monster! Give it back right now! We don’t have anything left to drink and I can’t even wet my paws to ease the heat!”

The other animals, seeing the hare’s outburst, also turned to the sun. They snarled and barked and shouted and cried,

But the sun didn’t even blink in the face of their pleas, and the animals had no choice but to curl up in the shade and wait for the rain to finally come.

Day after day, they gathered by the pond to check if it had perhaps filled overnight. But it was still completely empty. They were out of luck.

That is, until one day, when a strong wind suddenly rose up. Tree branches bent and swayed and creaked. Clouds covered the burning sun and banded together into one huge, dark cloud. Thunder clapped and lightning struck, and suddenly, just like that, a tiny raindrop fell and landed right on the hare’s nose.

“The rain has finally come!” he shouted to his friends, jumping around joyfully.

And, sure enough, rain started to pour. Everyone scurried out of their holes and danced in the rain for hours and hours.

It rained for days, and the hare couldn’t wait to finally be able to plunge into his beloved pond. Finally, as the rain began to let up and turned into a light drizzle, he decided he would go to the pond just to see how much it had filled up. It was completely full! There was a light mist coming off of it, and the hare’s friend, the wise old turtle, was already sitting on the bank and admiring the most beautiful view. Together they sat and watched the calm drizzle coming down, and soon the clouds began to part and the sun broke through the clouds. Suddenly, the hare noticed something he had never seen before. There was a marvellous arc in the sky, full of colours.

“That’s a rainbow,” said the turtle, as if reading the hare’s mind. “When the sun shines through raindrops, the light splits into colours.” The hare thought he had never seen anything so beautiful.

After some time, the rain slowed, then stopped. The pond was once again full to the brim and everything around it was the most marvellous green! The rest of the animals came out of their burrows, and the hare and his friends jumped into the pond and played happily once again.