The Tale of the Lion and the Mouse

Even the weaker can help the stronger.This version of Aesop's fable is about a great strong lion, the king of the jungle, who one day gifts life to a little mouse. Soon, when the lion falls into a trap and finds himself in need, the mouse comes to help. By saving the lion’s life, the mouse repays him for his kind act. 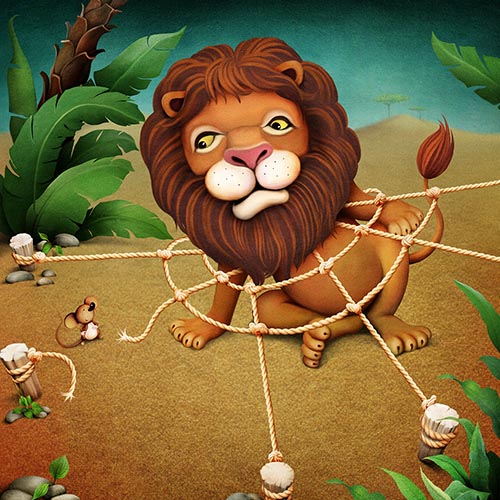 Once upon a time, there was an old, grumpy lion who ruled the entire forest. When he roared, the sound echoed throughout his entire kingdom. It told all the animals in the forest to be very careful, because the lion was taking his daily stroll through the forest. Whoever didn’t hide was at risk of being chomp-chomp-chomped down with his sharp teeth.

Today, just like any other day, the lion was sleeping off a good lunch in the shade under the Baobab trees. However this time he’d lay down by a small mouse hole that he hadn’t noticed.

When the mouse came out of his hole, he accidentally tickled the lion right under the nose with his tail! The lion woke up and roared so loud the ground shook. When he saw the teensy mouse, he clutched it in his large claws right away.

“How dare you wake me from my afternoon nap, you little tickly-tockly mouse!”

He was so angry he decided to eat the mouse. He couldn’t just let him go, that would be ridiculous. It would make him a laughing stock for all of the animals in the forest. None would fear him or his roar again.

“Stop, stop, please,” squeaked a high voice from the lion’s claws. “What will you gain if you eat me? Think about it! I would get lost in your enormous stomach. You probably wouldn’t even feel me. But if you let me go, I might be useful to you,” pleaded the little mouse. “Squeak, squeak, please!”

The lion listened to him with a certain curiosity. He had to admit that this little grey mouse was right. It wasn’t really much of a snack and anyway, he was still full. So he had mercy on the mouse…