The Soldier and the Horse 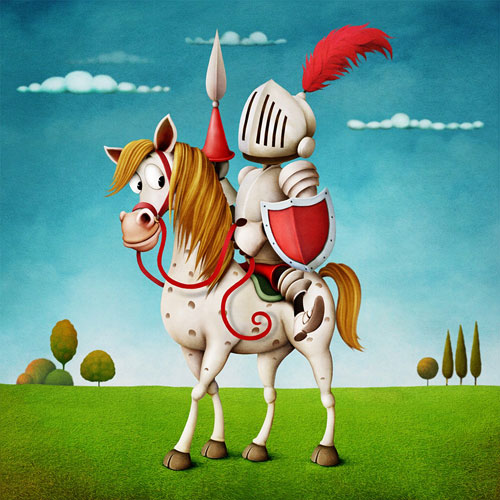 A long time ago there was a brave soldier. He had a loyal horse that had kept him company for many years. It had stood by his side on the battlefield during war, overcoming all the challenges and dangers they met on their way. The soldier knew very well that it was mainly his horse’s courage that helped him get home from battle safe and sound each time, and so he did all he could to give him the best life possible.

He fed him the best food three times a day, and there was always plenty of straw to snack on whenever the horse felt like it. He drank litres and litres of water, and the soldier refilled his trough several times a day. The soldier cared for his coat, making sure that it remained soft and shiny, and combed the horse’s mane each day. Not to mention the blacksmith, who visited them regularly to keep the horse’s hooves healthy and shod.

In short, the soldier did everything for the horse, pampering and caring for him, day after day. The horse was always fit and content and he neighed happily in his stable, which was so clean you couldn’t find a single fly in it. And the horse repaid his master with his good service in battle and became his inseparable companion.

After some time, the war was over, and the soldier no longer needed a horse for the battlefield. He became a farmer and started using his horse for very hard work. Every day, the horse had to help his master plough the field, dragging a very heavy plough behind him. Sometimes, the master would hitch him up to drag some wood from the forest or bring a heavy load from town. The horse had to work very hard every day. The master didn’t treat him to all the delicious food that he had done before, and only fed him ordinary weeds. With no special care, the horse became weaker and thinner. Soon, this strong and noble steed became a poor, fragile animal.

But as fate would have it, after some time, the country went to war again. When the soldier got the news, he started taking better care of the horse right away. He thought that if he started treating him better, his strength would come back, and he would be a reliable and faithful friend to him on the battlefield again. Well, it was too late. And they had to go to war in only a few days...

The day he left for the battlefield, the soldier, clad in heavy armour and carrying various weapons, put a saddle on his sickly horse and got on his back. The horse could not carry such a heavy load and he fell to the ground under all that weight.

When the tired horse tried to get up again, he said to his master sadly: “Now you have to go to battle alone, because your bad treatment has changed me from a horse to a donkey. I cannot carry you like I used to.”

Let this be a lesson that you should always think about others and never forget about your friends.