The story is about the magic words “Thank you”!One day Johnny goes to the mountain to collect something to snack on. Then he hears a cry for help.He ends up helping out an old lady who has fallen into a swamp. To repay him, she gives Johnny a clay mug. It’s not an ordinary mug, though - as Johnny will soon discover. 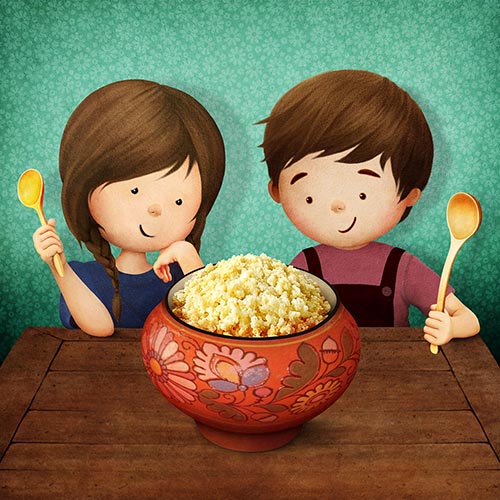 Once upon a time, in a little cottage deep in the dark forest, there lived two orphans. Their names were Johnny and Annie. Having lost their parents, they had to take care of themselves. They learned how to wash their clothes, sew, and do house chores. The forest, despite being dark and mysterious, wouldn't have dared to let the siblings starve. It offered them sweet forest berries. But then winter came and the forest was suddenly bare. There were no sweet fruits anymore, but only a strong wind blowing and shaking all the trees. Johnny was worried about their food supplies for the winter.

One day, when he went to gather wood, he heard a voice: “Help, help! Please, help me!”

Johnny at once ran towards the desperate voice, deeper and deeper into the forest, until he found an old swamp. The forest path faded into the swamp and then came out on the other side. Crossing a swamp like that was clearly no easy task, and in fact an old woman had got stuck in the middle of the mud and was screaming for help. She was carrying a bag on her back. It was so big that it had dragged her down and she couldn’t move an inch in the muddy swamp. Not hesitating for a second, Johnny broke off a very long branch from a nearby tree, passed one end to the old woman and told her to hold on. Then he pulled and pulled and pulled with all his strength. Finally, he managed to free the old woman from the swamp.

“Where were you going, ma’m?” asked Johnny, when her feet were safely back on the ground. “Well, I wanted to sell my clay pots at the market in town. My husband makes them and then I go to sell them at the market. But this swamp changed my plans…,” replied the old lady. To thank Johny, she opened her bag full of clay pots and gave him a small, ordinary-looking mug.

“Take this mug as a thank you for helping me,” said the old lady.

“Thank you ma'am. This will most certainly come in handy, because we don’t have anything to bring water from the stream,” said Johnny gratefully.

But the old lady shook her head.

“You’d better not bring water from the stream in this mug. What if you break it on a stone? It would be such a shame. This is not an ordinary mug. When you say, cook, mug, cook!, it will start cooking sweet porridge. And when you say thank you mug, that’s enough, it will stop cooking,” explained the old lady.

Johny thanked the old lady for such a useful gift with all his heart and happily ran home to his sister so that they could try the mug together.

He ran into the cottage, put the mug on the table and yelled: “Cook, mug, cook!”

The mug shook and bubbled, and suddenly it was full of sweet porridge. They both took their spoons and started eating the porridge until their bellies were full.

“Thank you, mug, that’s enough,” said Johnny and the mug stopped cooking. The smell of the sweet porridge filled the cottage and Johnny and Annie ate much better than they had in a long time.

From that day on, Johnny and Annie stopped being afraid of the coming winter. There was always a fire crackling in their fireplace and heating up their little cottage, and on the table, sat their little mug, which always gave them sweet porridge to eat. They didn’t have to worry about what to eat, and so winters weren’t that hard anymore. However, they did start running low on wood eventually, and so Johnny went back into the forest to get more sticks for the fireplace. In the meantime, Annie decided that she would clean up the little cottage. She sewed up the holes in their clothes, cleaned the floors and was starting to get hungry. She wanted to wait for her brother to come back from the forest, but since he was taking a long time she decided to eat by herself. So Annie called towards the table: “Cook, mug, cook!”

The mug shook and bubbled, and suddenly it was full of sweet porridge. Annie took a spoon and started eating. When she was full, she told the mug again: “Mug, that’s enough!”

But the mug kept going and Annie couldn’t keep up with it any more. It didn’t even help when she held a lid over the top with all her strength. The porridge overflowed and covered the table. “Mug, stop it,” she shouted in vain.

But the mug kept cooking and soon the porridge had filled the whole cottage.

But it didn’t help and the mug cooked on and on. The porridge flowed out of the cottage, creating a big, sweet lake in the yard. Annie tried many different magic words to stop the mug, but none of them worked for her. This was because she had forgotten the most important, most magic word of them all: Thank you. Completely frightened, she sat down in despair and started crying. In the meantime, her brother finally came back from the forest.

With effort, he waded through the porridge and shouted: “Thank you, mug, that’s enough.” In that instant, the mug stopped cooking and the porridge stopped flowing out of the cottage. Annie thanked her brother in tears for saving her from this sweet flood. She would never, ever again forget the magic word thank you. For a long time after that, they had to clean the cottage and the yard of the sweet porridge. But at least they had something to do in winter.

The children always thanked the magic mug very nicely and it kept helping them for a long, long time. The end.